Taroona to Kingston: Another Pathleſs Walk

The walk from the centre of the city of Hobart to the town of Kingston (part of Greater Hobart) is 12km (if you credulously accept the premise of Google Maps that you can walk by way of the Southern Outlet) or nearly 16km if you go by way of Sandy Bay Road and the Channel Highway.  The latter route also has footpaths for nearly 11km—seldom leſs than fair and, for most of the time, good—from Hobart until near Baringa Road, Taroona.  A few times, however, near the end of the footpath, the kerbing is not helpful to the infirm or wheelchair-bound.  See the last two junctions—to Hinby Road and to Illawong Crescent—before Baringa Road. 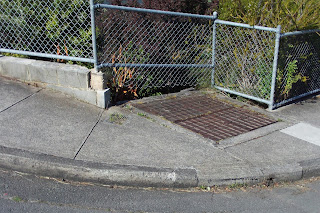 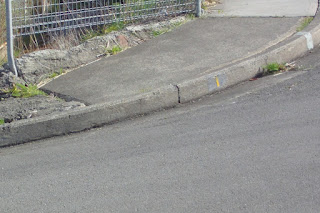 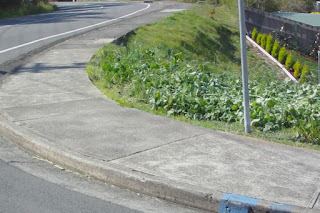 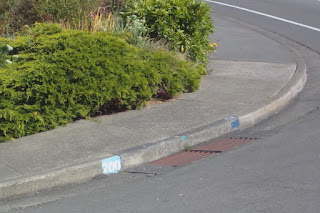 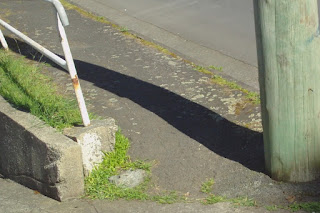 Not that there is much point for the wheelchair-bound to try to negotiate such difficulties southwards thence; soon there is no provision at all for those in wheelchairs. 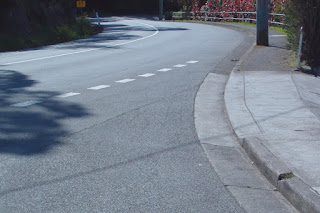 At the Baringa Road junction the footpath ends completely; however, for a little distance, there is a rough track near the road. 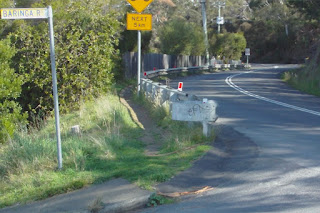 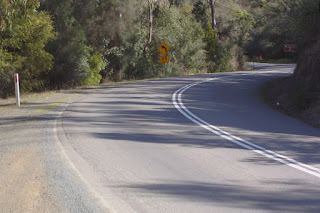 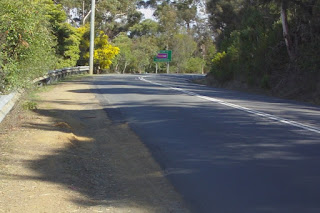 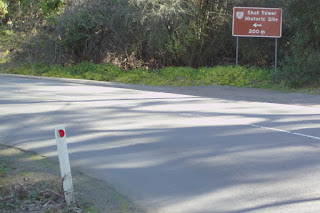 Even near the Shot Tower, a major tourist feature of Taroona, no footpath is provided.  To be fair, though, motorists are warned of pedestrians. 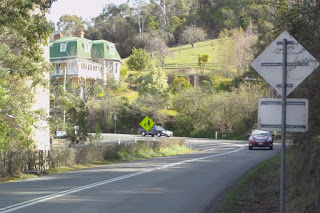 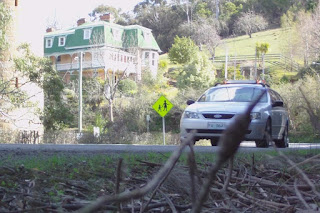 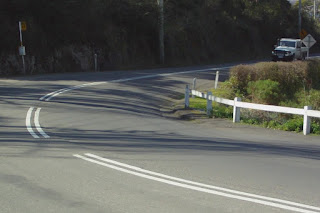 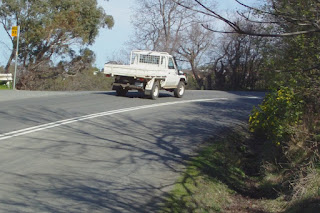 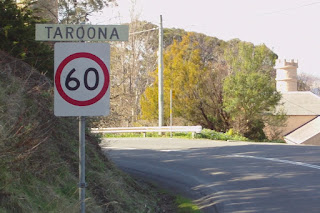 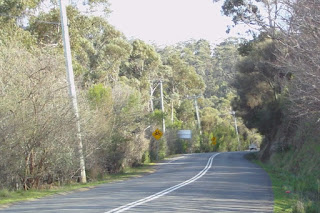 Wait, just beyond the town marker, is that a bike sign in the middle distance?  Might it signify, perchance, a bike lane?  Why, yes; it is a bike lane of sorts which goes for almost a furlong, and then stops. 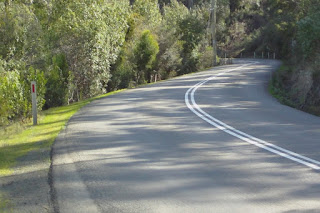 After the bike lane ends there is no path on Bonnet Hill until very near the town of Kingston.  Children who dwell along the highway, when they alight from buses after school, and particularly in the dark evenings of winter, evidently must learn to be quite cautious, especially when vehicles occupy both lanes. 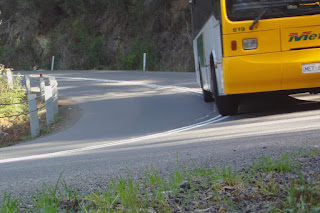 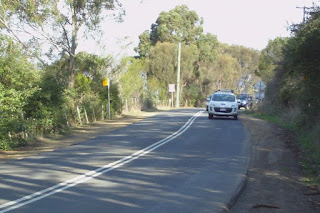 For most of the route, from the edge of Taroona to the edge of Kingston, over Bonnet Hill, pedestrians must walk on the road though a graſsy or muddy shoulder might exist here and there for a chain or two.  Near the bottom of Bonnet Hill, however, there is a marked lane for cyclists or even, perchance, pedestrians. 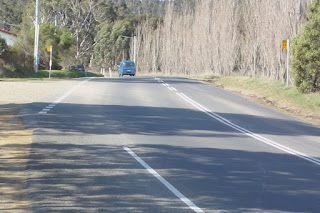 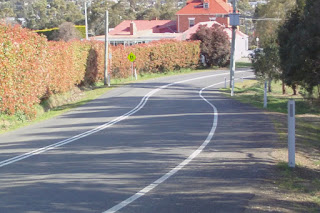 Not that the area so delineated is remarkably safe. 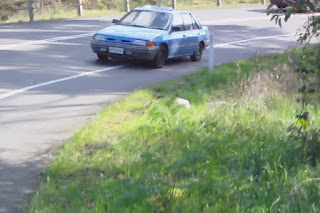 There is only one bridge on the Channel Highway between Taroona and Kingston, over Brown River; it has slight provision for pedestrians. 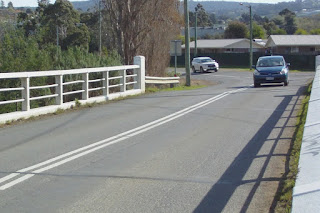 Now, having reached the town, footpaths are at last available.  Yay! 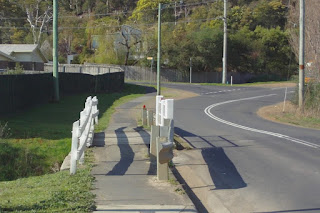 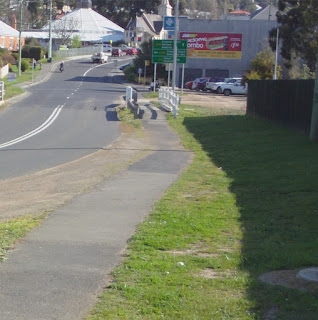 (Informal walked from his dwelling in Battery Point to the bus stop in Kingston shewn in the picture above—a distance of 14.3km, according to Google Maps—, with many pauses to take pictures, in around three hours on Monday, 14 September.)


UPDATE I (25 September):  Informal wrote (onymously) to all the councillors of Kingborough Council last week and again today asking why “there is a dangerous lack of proper footpaths between Taroona and Kingston”.  He received one response, from Councillor Flora Fox:


Dear unkown resident, I usually do not respond to anonymous emails.
This is a State Government road, not Council responsibility.  [sic]


Thankyou for that anonymous note- but what is the problem with the Alum Cliffs track which provides a path exactly as you wish?

He asked a fair question, and Informal replied:


Until this morning […] I had never heard of that track.  I am no recreational walker, and I saw no sign anywhere along the road from Hobart to Taroona making me aware of its existence, but now I know of the track I shall walk thereon, ascertain how suitable it might be for casual pedestrians (and for those confined to wheelchairs), and publish a report thereof.

The name “Track” seems suggestive of a track more than a footpath but you may expect a report of the Alums Cliff Track soon.

The Alum Cliffs track is not designed for the disabled.  I am 79 and recently walked the track comfortably.

Informal sauntered to Kingston, this morning, by way of the Alum Cliffs Track.
The track, being a path whereon people may indeed travel by foot, is technically a footpath; however, it is very steep at times, is quite unsuitable for the infirm, and is mostly inacceſsible to those in wheelchairs or other wheeled conveyances and, as such (contradicting Dr. Bury’s implied suggestion in his earlier question), far from the sort of footpath the members of Proper Footpaths “exactly” desire. 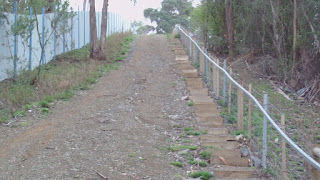 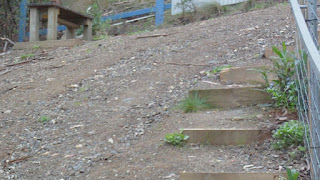 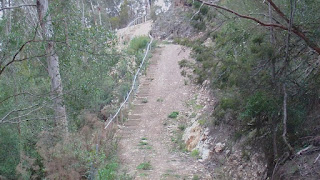 A pictorial report is available here.

Council and the community have been lobbying the State Government for many years to connect the up-hill bike lanes between Taroona to Kingston over Bonnet Hill.  Last year the State Government committed to complete this project, to be commenced this year.  This will make it safer for all road users, including pedestrians and the Shot Tower will be safer to visit.

Council has also constructed a walkway along the foreshore cliff between Kingston to the Shot Tower, the Alum Cliffs Walkway, with the remaining section of private land to Taroona currently being compulsorily acquired by Council for completion of the link.  This iconic walk is already very popular with residents and visitors alike and has benefited from many years of work and funding from Council.

I am a strong proponent of walking and bicycle paths, as well as paths suitable for those with physical disabilities that limit their mobility.

As you’re probably aware, the provision of walking and cycling paths is restricted by the financial resources of the Council.
The particular road you wrote about, from Taroona to Kingston over Bonnet Hill is a state government road.  This year, after lobbying from the community and Council, the State Government has decided to spend significant funds upgrading the road shoulder to form a lane for cyclist and pedestrians on the uphill sections of this part of the Channel Highway.  Although not an ideal bike path or footpath, this will at least provide greater safety to those walking the road.
A further recent initiative from Council is investigation of a multi-use path from Bonnet Hill to Mount Nelson along the skyline.  I have walked this route on several occasions and think that it could make a pleasant alternative to a path beside the traffic.
There are many parts of Kingborough that would benefit from improved paths, both alongside roads and on separate routes.  For bike paths we draw community input through the Kingborough Bicycle Advisory Committee.  The Acceſsibility Committee gather[s] community opinion on priorities for the physically disabled.
Much of the construction work that Kingborough Council does for paths is as part of other road upgrades, for example the footpath along the Channel Highway towards the Antarctic Division opposite the Spring Farm intersection will have a new shared path as part of the traffic changes when Bunnings builds at the site.  Other capital work is scheduled against competing priorities on our capital works program.
I hope this brief letter gives you hope that Council takes the provision of walking and cycling tracks seriously.  We are well aware that there are short-comings in some of our paths and the details you have highlighted are among them.

From your email stating proper footpaths, I have taken it that you are referring to a footpath made from permanent material with kerb and guttering.
Should this be the case, I would expect such infrastructure to cost to be in excess of $1.5m (one side of the highway).  Please also note that the Channel Highway is a State road, and not Council’s.  In addition to secure a proper footpath Council would need to purchase land, as in many cases the verge of the highway is not existent for a proper footpath.  As the footpath would need to run below the highway in places, considerable safety fencing would be required, along with excavation, drainage etc.  As you can see from the above, this project could run wildly into say $3m plus.
The amounts to be expended are simply too much, and against other priorities is simply not financially viable.  Prioritisation would see this project against several towns in Kingborough that do not have a footpath in their main shopping zones.
Council has also been working towards the re-establishment of the Allum Cliffs Track from Taroona to Kingston, a track that has become iconic and much travelled by Taroona, Kingston and further afield residents.  This track away from motorists must be safer and more enjoyable to walk.
I trust the above gives some insight into the works required.

Email ThisBlogThis!Share to TwitterShare to FacebookShare to Pinterest
labels: Channel Highway, Taroona to Kingston, the dearth of paths, walking